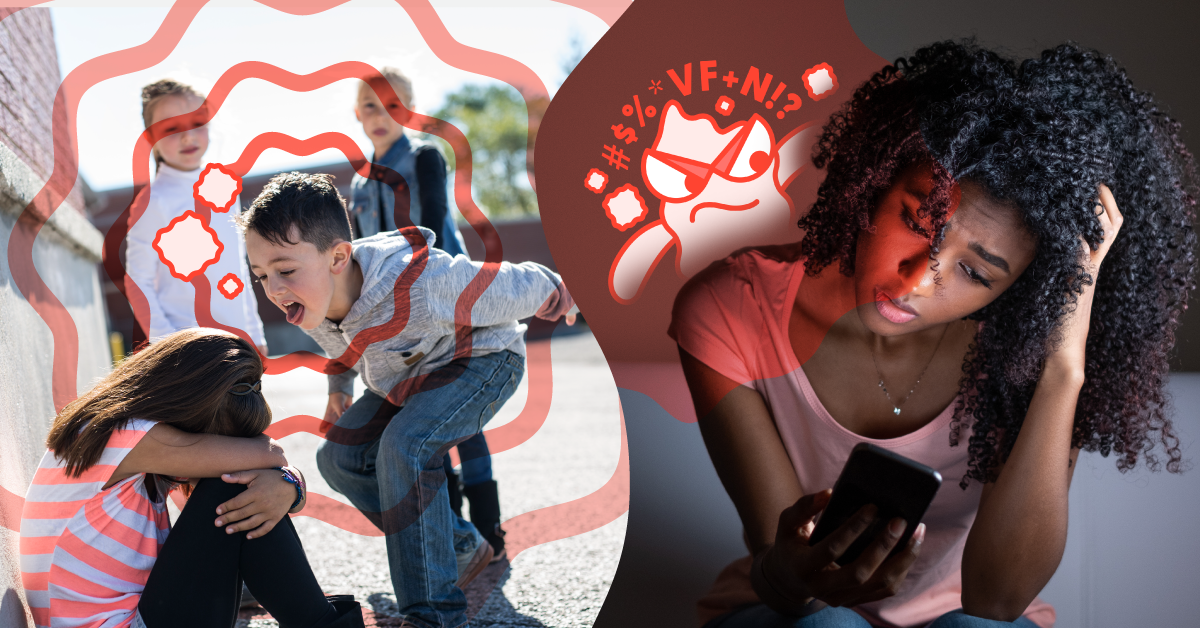 Traditional bullying vs. cyberbullying — you probably think they’re fairly similar, but for today’s kids, the difference is like night and day. The emotional and confrontational core may be the same, but cyberbullying plays out in intense ways our generation couldn’t have imagined. In this post, we’re going to take a deep dive into current examples of cyberbullying and explain how they’re more serious than you might think.

In days of bullying past, anxiety often centered around running into bullies at school, on the playground, or at the mall. While these locales may have been unavoidable at times, there was at least some reprieve when you got home.

Today, the entirety of cyberbullying happens online. It can happen at any time of day and at any place you can bring a phone: on the bus, at the dinner table, and even at your church. Kids can also hear the ping of a nasty message while sitting next to you on the couch. Home is no longer a safe space, as late into the night kids can be hunched under the covers, trying desperately to make sense of the vitriol being posted online about them.

There are countless ways children torment each other online, and each has its own peculiar M.O. There are active ways — things like aggressive and taunting texts, emails, chats, and comments. And then there are passive ways — posting a mean photo or a screenshot on Snapchat, for instance, that can be seen by hundreds of other kids in a matter of minutes.

Though the traditional advice is to block or defriend a cyberbully, cyberbullies can simply switch to another platform or create a new account to continue the harassment, like a social media hydra. This inescapability is what can make cyberbullying so dangerous — and hard to fight.

Also prevalent is an activity known as “siccing,” where one bully recruits friends to gang up on a victim and launch a joint attack on their social media account. In these situations, the onslaught can be terrifying and near-impossible to ignore.

Burn books used to be destructive forms of social currency, and they were a perfect example of the incredible powers of groupthink in bullying. They’d be passed around and shared, and page after page would be filled with mean, hurtful statements about people.

Today, there’s no need for a physical book that could be left behind or confiscated. They exist online in Google Docs and in files. They can be password protected and shared peer-to-peer instantly.

Today’s burn books may also take the shape of private, invite-only group chats and messages, portions of which can be leaked out via screenshots and shared online.

It was always possible for rumors to spread anonymously — think rude messages scrawled on bathroom walls, lies whispered ear-to-ear through the hallways — but with the internet, anonymity has become part and parcel of cyberbullying.

Especially popular right now are anonymous messaging apps making the rounds at schools. Kids can log in and leave hurtful comments anonymously, unattached to their real names, email addresses, or phone numbers. Knowing that no one can trace these profiles back to them, cyberbullies are emboldened to attack their victims even more cruelly.

Many kids also follow “tea accounts” — tea being a common slang term for gossip. There are mainstream tea accounts run by popular influencers, but it’s also easy for kids to create their own and “spill the tea” about students in their school. These accounts can be accusatory, inflammatory, and even harassing.

It’s Easier Than Ever to Impersonate Someone

The closest analog for this type of cyberbullying in the past was impersonating someone on the phone — but even that doesn’t really come close to what’s happening now. These days, kids can quickly and easily create brand-new Facebook, Snapchat, Instagram, and other social media profiles pretending to be another child with pictures and personal information, both of which are readily available online.

They then post embarrassing, scandalous, or even illegal content to try and get the victim in trouble. Not only does it affect the victim’s sense of worth, but it’s often made public for the entire school community to see, as well, adding humiliation to the sense of invasiveness.

So, traditional bullying vs. cyberbullying: those are the basics of what you need to know. Technology has changed many aspects of our lives, but the way it’s changed bullying is more hurtful than ever before. Talk to your kids about cyberbullying often and make sure they know you’re always there to listen and help if they need it.

← Difficult Topics: How to Talk with Your Kid What to Do When Your Child Bullies →