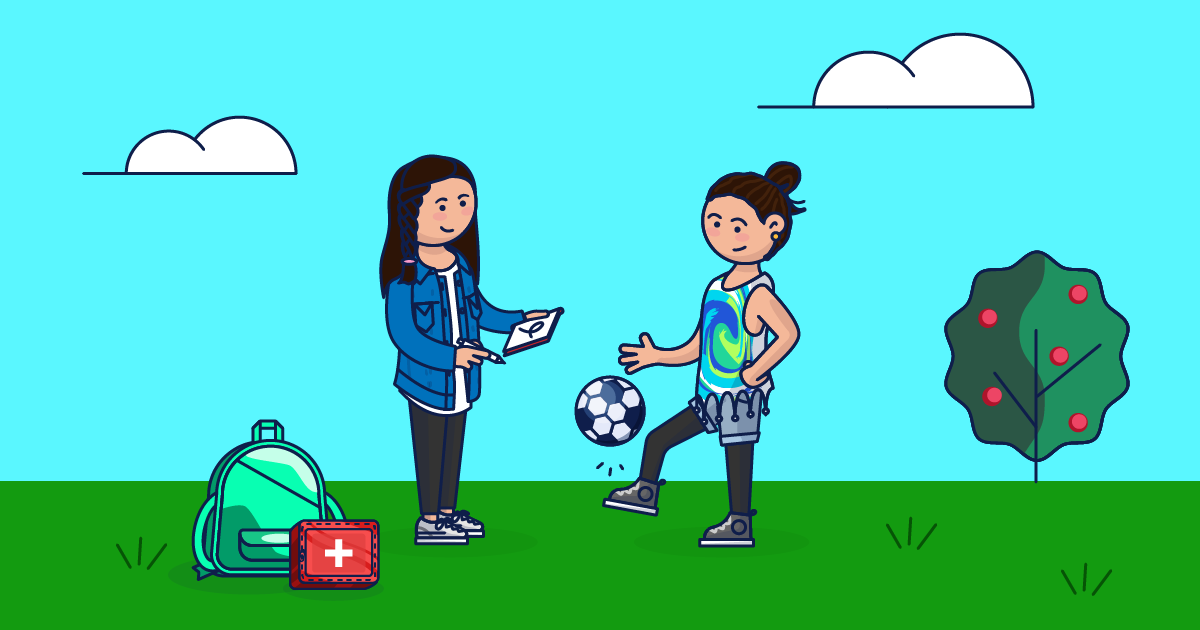 Growing Up With Mutliple Food Allergies

People sometimes talk about multiple food allergies in a vacuum: the cold stats, the punchlines, the stories from a friend of a friend. But for the kids who have them, what is life really like? There are 5.9 million children living with food allergies in the U.S. today, a number that’s doubled since 1997.

I recently sat down with two young girls with serious food allergies to understand how it feels to grow up with them. Riley is 10, loves to read, and is a Harry Potter fan. Sadie, her sister, is 9, athletic, and a dedicated soccer player. Both girls share a nut and sesame allergy, but Sadie also can’t have mustard, eggs, or dairy.

Part of the difficulty of navigating life with allergies is not just avoiding eating certain foods (though that presents its own difficulties when it comes to nutrition labels and restaurants), but avoiding other people’s food, too. Riley and Sadie are both touch-reactive, which means that even trace amounts of an allergen can affect them. For example, if a classmate had a peanut butter sandwich for lunch, didn’t wash their hands, and touched Riley or Sadie’s school supplies, there’s a chance they might react.

So, each school day is punctuated with periodic breaks to help keep them safe. “When we walk in for the day, everyone in the class grabs a wipe and cleans their hands,” Sadie said. “We do it again after snack, and lunch, and when we come back after recess.” The class doesn’t seem to mind, and the teachers are eager to keep their students safe.

Special event and celebrations can be harder, though. Both girls have to deal with the emotional stress from dealing with a world in which they’re sometimes the odd kid out just because their bodies react to a few different substances. “Having to bring your own food every time gets a little tedious,” Riley said. 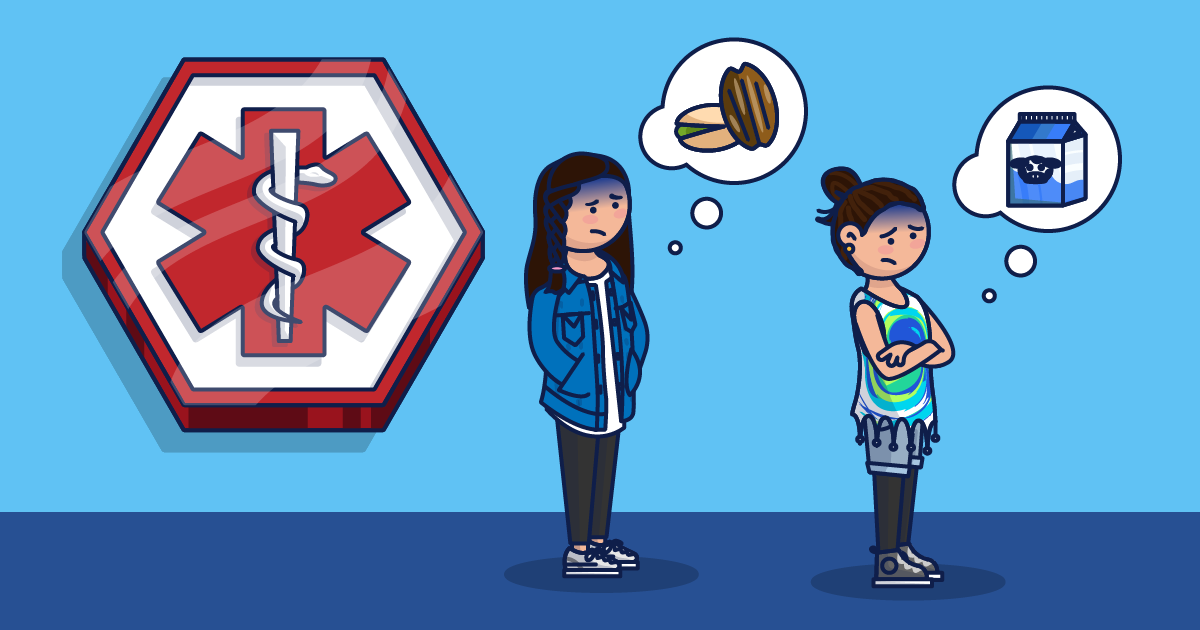 Much like their school routine, the girls also have a set-in-stone plan every time they leave the house. “I have to make sure I have my phone, just in case I have to contact mom or dad. I also have to have my Epi-Pen, and my antihistamines,” Sadie said. If they’re heading to school, it all goes in their backpacks. When she goes out with friends, Riley will discreetly throw everything into a fanny pack so she has ready access.

But while there’s logically an amount of security that comes with carrying a $600 portable injection of epinephrine, it can also be frightening for the girls — its mere presence a reminder that there may be a situation where they have to use it. Using an Epi-Pen is not a pleasant experience, to say the least.

“It doesn’t feel like a needle at all. It just feels like a lot of pressure — it’s almost like a big punch. And then after it feels sore,” Sadie said. For her sister, it’s an opposite experience. “I’m actually super afraid of needles,” Riley added. Despite this, she knows exactly when and how to do it herself. How many 10-year-olds are physically and emotionally prepared to give themselves an injection in a medical emergency?

Also scary is what comes after the Epi-Pen — many people don’t realize that it doesn’t just end with a quick injection. When I asked Sadie what the scariest part of an Epi-Pen is, she said, “Mostly, I just don’t want to go through another thing like that again.”  What she means by “another thing” is all of the intense activity that comes after the Epi-Pen. After the injection, 911 is called. An ambulance arrives with sirens blaring, and a stressful and scary trip to the hospital is in store.

What most people likely don’t realize is that Epi-Pens aren’t foolproof. They’re a lifesaving measure, but they aren’t a guaranteed remedy when a reaction happens, as news articles have shared again and again. This fact alone can contribute to anxiety and worry among kid and parent alike.

Having cell phones has been a game changer for the girls and their family. “It’s true that they got their first phones a little earlier than some of their friends, but it’s been essential for our family,” said Riley and Sadie’s mom. Being able to communicate instantly and send photos of nutritional labels has given the girls more independence when they’re away from their parents.

That said, phones can present challenges, and cyberbullying is a real concern. Roughly one-third of all kids with food allergies are bullied. And compared to their peers, they’re twice as likely to get bullied in the first place. “In the same way that my parents didn’t have to worry about food allergies when I was a kid, they didn’t have to think about cyberbullying, either,” notes the girls’ mom. “New challenges require new solutions!”

For a food allergy mom, and simply a mom in the digital age, she recognizes the need not only for technology but all of the protections that must go along with it. That’s why the girls have Bark — it monitors their texts for signs of digital dangers. 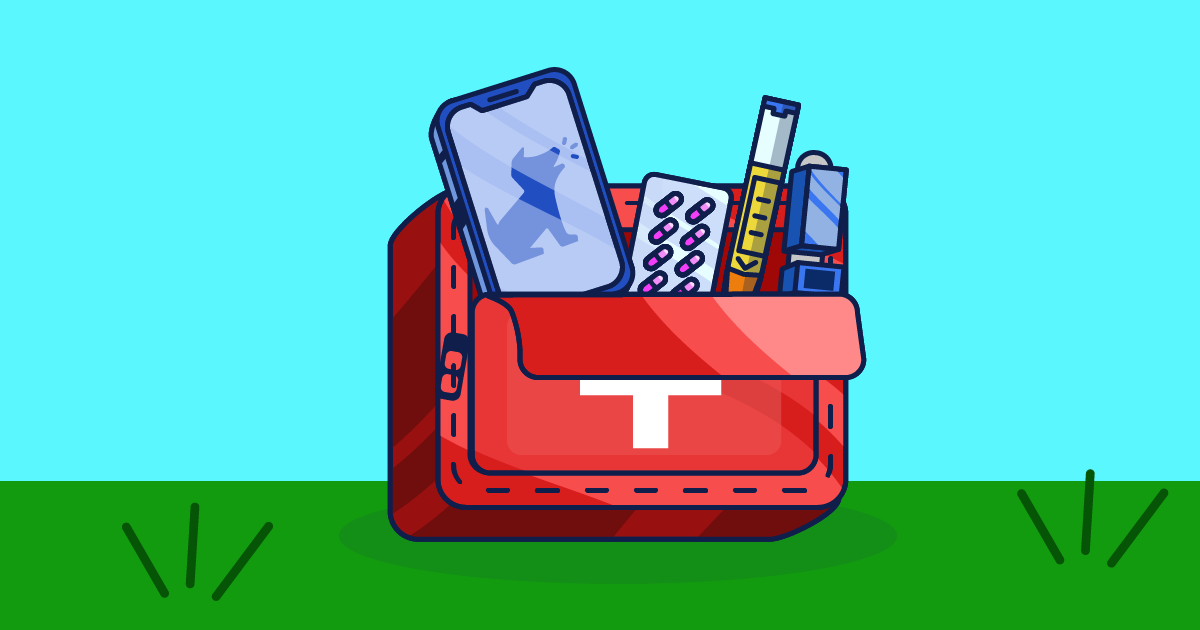 A few years ago, Sadie had a serious reaction while the family was eating at a restaurant. She was rushed to the hospital and everything ended up OK, but Riley was overcome with emotion and concern. “It’s a big sister thing, I think,” Riley said. “I trust Sadie with sports, she’s really, really athletic, and she’s a daredevil but she’s agile. With allergies it’s a little bit — I don’t really know how to explain it.” Trailing off, I can see that Riley is visibly upset, and the concern she feels for her little sister is palpable. With food allergies, it’s not always the person who has the reaction that gets the most worried.

The girls are lucky, though. They have incredibly supportive parents, haven’t had too many serious reactions, and haven’t faced extensive bullying or teasing because of their allergies. They’re like every other kid — they just have to be careful around a few ingredients.

“Allergies can be a scary thing, but it’s important for everyone to be safe. You’re almost like someone guarding a castle,” Sadie said. This is perhaps the most heartwarming way I’ve heard someone refer to the responsibility we all owe each other — multiple food allergies or not. Sometimes, it just takes a kid’s perspective to help make it clear.