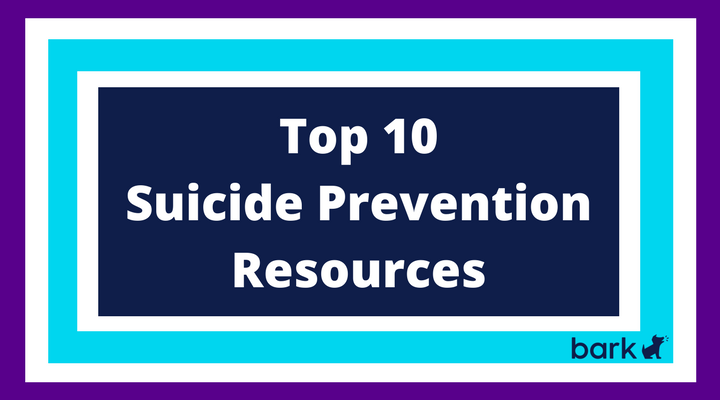 Suicide is a topic that deserves our awareness all year round, but September shines a spotlight on this issue as Suicide Prevention Awareness Month. If you or someone you care about is struggling with suicidal thoughts, there are many suicide prevention organizations that can help. If you believe your child or another person may be in immediate danger, call 911. Depression, thoughts of self-harm, and suicide are serious matters that always require swift attention.

Here are the Top 10 Suicide Prevention Organizations and Resources:

The SPRC is one of the most comprehensive resources for suicide prevention. In addition to information and training, they offer a hotline to help anyone who’s thinking of ending his or her life: 1 (800) 273-TALK. The website has links to resources in different states and a video providing advice on how to help talk people out of committing suicide.

This website has lots of information about mental illness and suicide prevention, including statistics, symptoms, treatment options, and risk factors. This site is useful for understanding the connection between suicide and other mental health issues such as depression, bipolar disorder, and others.

3. The Society for the Prevention of Teen Suicide (SPTS)

Teen suicide is a growing problem in America and many other countries. SPTS is a non-profit organization created by parents whose teen-aged children committed suicide. It’s dedicated to helping to reduce the problem of teen suicide by providing resources for teens, as well as, parents and educators. SPTS pushes for legislation requiring teachers to undergo training in suicide prevention.

The CDC is a government agency mainly known for addressing health issues. However, it also has information about preventing violence and suicide. The website has links for preventing suicide in specific populations such as gay men, Native Americans, traumatized children, and others.

This is a public and private alliance of organizations dedicated to preventing suicide. The Action Alliance works with many groups, including government agencies, religious groups, schools, and mental health organizations to help people understand and prevent suicide. The Action Alliance, along with the Surgeon General, released a report called National Strategy for Suicide Prevention, which is one of the most comprehensive guides on this topic.

The AFSP website has a long list of resources, including crisis hotlines, advice for finding mental health care, substance abuse treatment, and resources for issues such as cutting, borderline personality, schizophrenia and other issues that often overlap with suicide. The AFSP also provides help to people who have lost loved ones to suicide.

Teens are often more comfortable texting than talking. This Crisis Text Line provides real-life human beings called, Crisis Counselors, who are trained to bring texters from a moment of crisis to calm with active listening and collaborative problem solving skills. Additionally, their blog provides tips and education on supporting people in crisis.

HelpGuide.org is a website with information on a wide variety of mental health issues, including suicide. The suicide prevention page has advice for both people contemplating suicide and those who want to help a suicidal person. The site also provides a list exposing common myths about suicide, such as the idea that people who talk about it won’t really do it.

Founded by a mother who lost her daughter to suicide, the Suicide Awareness Voices of Education (or SAVE) raises awareness in the public about suicide and what individuals, families, schools, and communities can do to prevent it. SAVE has local chapters around the country to raise awareness for this issue.

This organization, which was created in 1998 by the creators of a short film called Trevor, is a suicide prevention organization for LGBTQ (lesbian, gay, bisexual, transgender, and questioning) youth, who are especially at risk for suicide. It provides confidential phone and online crisis intervention services for young people in these communities as well as resources for parents and others in the community.