Your kids have been begging for one all year, and you’ve finally decided it’s time for their first kid's cell phone. That’s super exciting for them (and slightly terrifying for you).

You’re not alone, though, parents. More children than ever will be getting their first device this holiday season. Since we know what’s coming once that device is activated, here are a few tips to make the experience more pleasant (and much safer) for everyone.

We don’t mean that talk, but hey, it might be a good time for that too, since kids are just a few clicks away from some pretty awkward conversations. We’re referring to repeated talks about cyber safety from the moment your children first start using the internet.

They know the internet doesn’t come with an eraser, right? Do they know about digital footprints? When you hear about cyberbullying in the news, do you talk about it as a family? If your children are at that “flirting with their peers” stage, do they know that taking a suggestive photo rarely stays between the sender and receiver? Do they know that sharing a nude photo of an underage peer might be considered distribution of child pornography?

These are the kinds of issues that are really happening to families just like yours, so it's important to be aware of them — and talk about them!

Before Giving Kids a Cell Phone, Make a Technology Contract

Your tweens and teens are rapidly approaching adulthood, which is chock-full of contracts surrounding big, important life events. Why not give them their first greement for this life event as well? There’s something super serious about signing your name to a commitment, and this technology contract will help avoid any gray areas surrounding your expectations about how they should use their new device. It is also extremely satisfying to point to said document when issues arise and say, “See? You read this and signed it yourself — right here.”

We even have this free one you can download and print out. Tailor it for your specific family dynamic, and keep it in a place that can be easily referenced.

“Not My Kid” Syndrome

We know, we know, it’s not your child. It’s not our children, either. This is the same thing our parents thought about us when we were in middle and high school. Little did they know that we were actually (fill in the blank), and thankfully, we did not have smartphones to document all of the … blanks. Over 50% of children with accounts connected to experience at least one issue per month, and 82% of the time, their parents had no idea until our alerts brought it to their attention.

These kids are good kids. Smart kids. But ultimately, they’re still just kids. Kids make mistakes. They also delete texts before you can spot-check their devices and speak in text slang using acronyms and emojis that would make you clutch your pearls. Know that issues like cyberbullying, sexting, thoughts of suicide and depression, eating disorders, potential drug use, and online predators are actually harming children every day.

Giving your child a device while neglecting technology that keeps them safer online is like giving them the keys to a car with faulty brakes and no seatbelt. Don’t do that.

The Bark Phone is an absolute game-changer when it comes to online safety. It’s a Samsung A13 that comes with Bark built in, as well as robust parental controls like GPS-powered location tracking, app management, call blocking, undeletable texts, and more. Bark also can’t be deleted, and the parental controls are completely customizable so it grows with your child. The best part? It has a sleek and modern design, so teens and tweens will be excited to use it. Order yours today! The Bark Phone starts at $49/month with no contract required.

We know all of this can be overwhelming, and that’s why we created a private Facebook group called Parenting in a Tech World, where you can ask us (and other parents who have been there and done that) any questions you might have. There are many layers to protecting your children online, and they vary by device and household, but we’re here to hold your hand (and your glass of whatever) through the process.

This Is Your Brain Online

More than 92% of teens are online, and 73% check their digital channels daily. It’s well-documented that smartphone usage stimulates the same pleasure centers in the brain as sugar, sex, and cocaine. It’s no wonder we can’t put them down — you’re probably reading this post on one right now!

The good thing for those of us born pre-1980-something is that we know what life is like without everyone’s face buried in a glowing device. We know the difference between real life and Instagram’s filtered highlight reel. We know how it feels to be bored for hours at a time, talk to people face-to-face, date without swiping right, and sit by a phone attached to a wall waiting for someone to call.

Our kids don’t, and they never will. It’s important for us all to be aware of how these devices are affecting us, and to make sure our kids understand the risks of using them. At the same time, we shouldn’t be afraid that a kid's cell phone will change our children’s lives for the worse.

By fostering relationships of trust and talking through digital issues, our kids can connect to the world around them, and we can rest assured knowing we’ve done our best to keep them safe.

Is Your Child Ready For A Phone?

One of the most frequently asked questions we get here at Bark is, “How do I know my child is ready for a phone?” So we made a quick and handy quiz to help you find out where your family stands!

What is Kik? Well, it is a free instant messaging app, and it allows you to transmit messages, images, sketches, mobile webpages, video, and more to other users. While the Internet is full of apps that are similar to Kik, this particular app remains popular despite all the competition. As of 2016 it had about 300 million registered users, and an estimated 40 percent of U.S. teenagers were on it. Numbers which few of its competitors can lay claim to. But is the Kik app safe for teens?

The sheer number of teens using the Kik app is cause for concern. Especially for parents who worry that they should be doing more to monitor Kik, an app with no internal parental controls. Unfortunately, an app that draws online sexual predators who prey on unsuspecting kids.

Is The Kik App Safe for Teens?

One of the reasons Kik is so popular is that it offers a great deal of anonymity. For example, Kik doesn't require a user to provide a phone number. Instead, the Kik app uses the IP address to determine the user's location. This kind of attitude appeals to those who don't want to leave much of an online footprint, but it also leaves the door open to those online predators who exploit vulnerable teens.

Kik is criticized for leaving its minor users exposed. Teens can come across online predators who target them either for immediate exploitation, such as attempts at sexting, exposing them to graphic imagery, etc. Sometimes they are exposed to the more insidious practice of grooming, a process where someone befriends a child in order to take advantage of them for sexual purposes. While the Kik app attempts to address some of these concerns, these efforts have been criticized as doing too little to address these serious issues.

Should You Stop Your Child From Using The Kik App?

Allowing your child to use an app that's been involved in this kind of controversy can be scary. On the other hand, the Internet is a risky place, and it isn't possible to make sure every potential door to problematic apps stays closed. It's better to talk to your kids about which apps they use and how. Make sure they know how to stay safe when they're online. Healthy, positive communication about who they're talking to and about what, is the best preventative step you can take.

How Can You Monitor The Kik App?

With that said, it's also a good idea to insist on taking some extra precautions when your kids use Kik.  If you allow the use of Kik, you should have Bark monitor their devices. Is Kik safe for Apple devices? For iOS users bark can monitor your child's messages and message attachments (if available). Bark can also monitor Kik messages for Android and Amazon device users.

Bark keeps an eye on new app installations. We provide that extra layer of security so you can let your kids have their privacy, but you know there's an internet watchdog helping. We only alert you when there is a potential problem.

As parents across the nation were sipping their third cup of coffee yesterday, a social media bombshell dropped in our laps.  Facebook was now openly targeting children UNDER the age of 13 with the release of their new app: Messenger Kids. 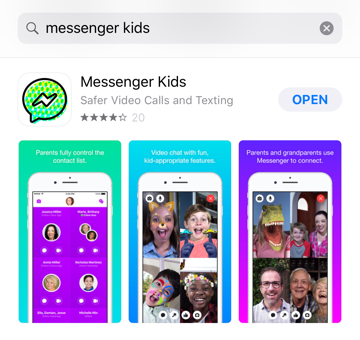 So what does that even mean? Well, CPO Titania Jordan went live On the Story With Erica Hill to discuss the pros and cons of this new app from the company who has over 2 BILLION monthly active users. 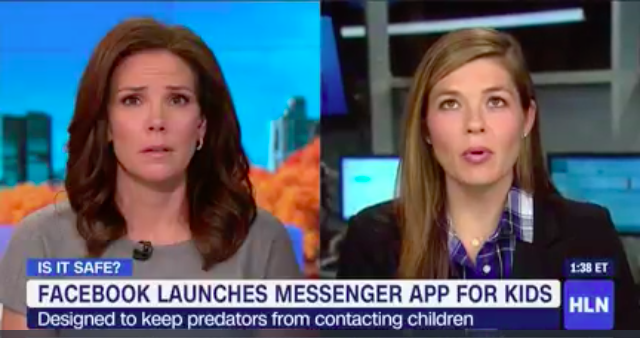 3 Reasons Why Messenger Kids Is Actually Kind Of Cool

1. With Messenger Kids, parents are fully in control. Your child cannot have a Messenger Kids account without you as a parent approving it first. You also have to approve all of their friends first before they can connect with your child. 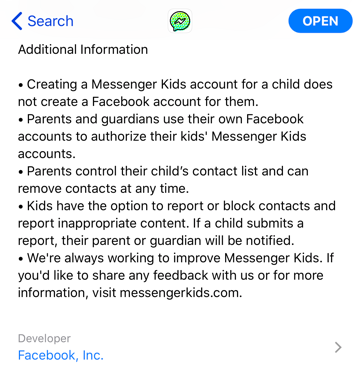 2. Unlike Snapchat, or group chat apps, messages don't disappear. Parents can go back and review messages if needed. This is a much better option than regular texting (as our data shows that over 25% of text messages are deleted daily by children with iOS devices). 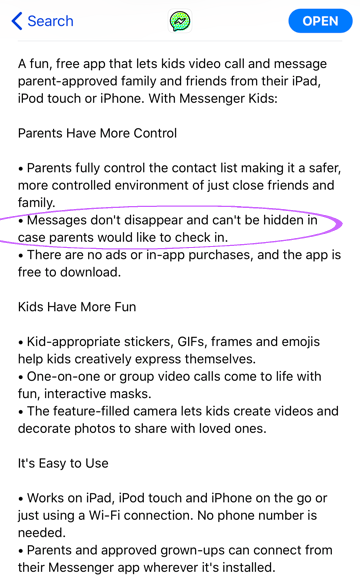 3. Since this isn't a typical Facebook account....there are no ads. There are also no in-app purchases (collective hallelujah belongs here). You also don't have to worry about inappropriate bitmoji or giphy integrations. The experience is fun and features are strongly vetted for a kid-friendly experience. 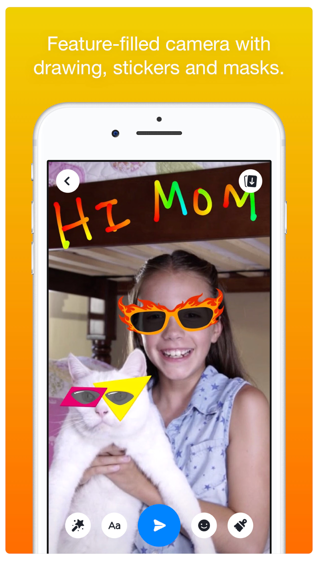 1. Kids don't need more screen time. Seriously. We do not need to push the 6-12 year-old demographic to be on a screen even more than they already are...or get cozy with social media before they truly need to. They have plenty of time to become social media addicts later into their teen years. Sigh. They need more face-to-face interaction with real live humans IRL. Really.

2. Parents might not want to friend every parent of their child's friends (and you have to be Facebook friends before your children can connect on Messenger Kids). There's a lot we could say here. But we won't. You get our drift.

3. Finally, this is still new. It remains to be seen if bad guys (or girls) can find a way to circumvent the system and contact kids. Let's hope not.

Want to dig deeper? We spoke to WVLT TV about this release yesterday as well, and you can watch the interview here. We also enjoyed reading these comprehensive pieces from the Wall Street Journal, Protect Young Eyes, and Engadget.

Want to download and try Messenger Kids for your family? You can do so here.